According to the data collected by Atlas VPN, cybercriminals started targeting the field of education and attacked users more than 356,000 times during the last academic year (2018-2019).

Hackers inject malware into different types of educational resources, from math textbooks to dictionaries. The most popular ones were English textbooks, with 2,080 unique cases. Not far behind were math textbooks, attacking 1,213 students. Literature is in third place, with 870 infected downloads. 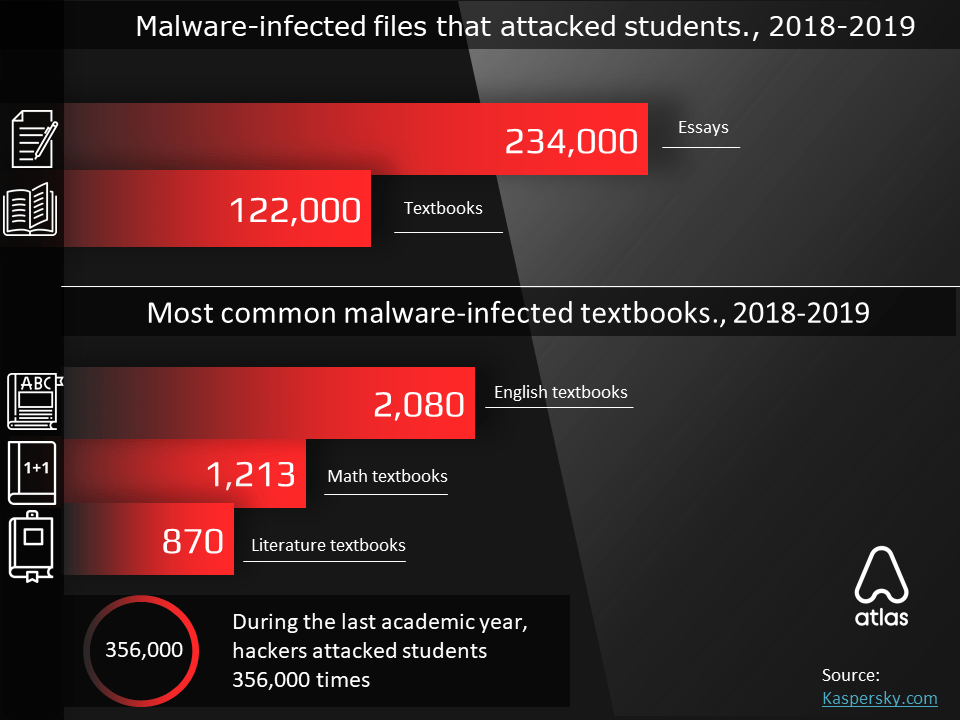 This data was collected globally. However, the actual number of cyberattacks is much bigger. The data is reported by Kaspersky, as their antivirus caught the cyberattacks. Yet, many students can not afford an antivirus program and attacks slip through unnoticed.

Why are hackers focusing on the field of education?

Since most hackers' main focus is financial gain, they shift their focus to wherever the money is. In 35.5% of the 356,000 attacks, the malware contained a well known Stalk Worm (Worm.Win32 Stalk.a).

Once on the computer, this digital worm can spread through all devices connected to it. Most commonly, a student carries the worm via a USB drive from their own computer to their school's computers.

After infecting the school's network, the worm can steal the data of the students, teachers, and administration. Then, hackers demand a ransom from the school in exchange for deleting the data or they sell it on the black market.

Ravi Pendse, Chief Information Officer at the University of Michigan, said that cyberattacks on students and schools have been going on for a while. He states that it is hard for schools to keep up with the newest technologies. Schools usually do not have a big budget for cybersecurity purposes.

However, even though schools do not claim it publicly, there is a lot of work focused on protecting their systems with the resources they already have, claimed Pendse.

Hackers exploit students to mine cryptocurrency

In some cases, downloads include malicious cryptocurrency mining programs that mine cryptocurrency for the hackers (cryptojacking). Once again this is a way for hackers to make money. Cryptojacking is a form of malware that uses the victim's computer resources to mine cryptocurrencies for the hackers. It makes your computer software and internet connection speed suffer. Also, your data usage will skyrocket, and the device’s battery will drain much faster.

Yet, there are no other clear signs that cybercriminals have invaded your computer. Hackers aim to remain unnoticed so that you would mine as many cryptocurrencies as possible. In the middle of 2019, many cryptocurrency markets saw price increases.

With the increasing cybercrime rates, what can you do to protect yourself? Schools as well as public and private companies you interact with store your information on their database. This means that you have no control over the data you shared with that company.

However, you can protect your mobile device by installing a Virtual Private Network (VPN). A VPN encrypts your internet connection and changes your IP address. Hence, your online journey becomes completely safe and secure.

Get Atlas VPN for your mobile devices here.