According to data based on the VPN Adoption Index by Atlas VPN, Virtual Private Network (VPN) downloads reached 277 million in 2020, from 85 selected countries.

A Virtual Private Network hides the user's real IP address and encrypts his browsing traffic. In turn, these changes prevent nosy 3-rd parties such as hackers, ISP (Internet Service Provider), or even the government from tracking the user’s online activities.

Finally, people turn to VPNs when their countries’ government blocks useful applications. One of the most common examples are VoIP services - short for Voice over Internet Protocol, or in simple terms, phone services over the internet, such as WhatsApp, Telegram, Skype, etc.

The VPN Adoption Index presented by the Atlas VPN research team overviews the statistics and explores the reasons why VPNs are so prevalent in these nations. VPN adoption refers to the percentage of the country's population that downloaded VPN applications in 2020.

Interestingly, the top 4 VPN adopters are Arab countries, where, on average, VPNs penetrate 44.75% of the market. In other words, 4 out of 10 citizens in these countries downloaded a Virtual Private Network application in 2020. 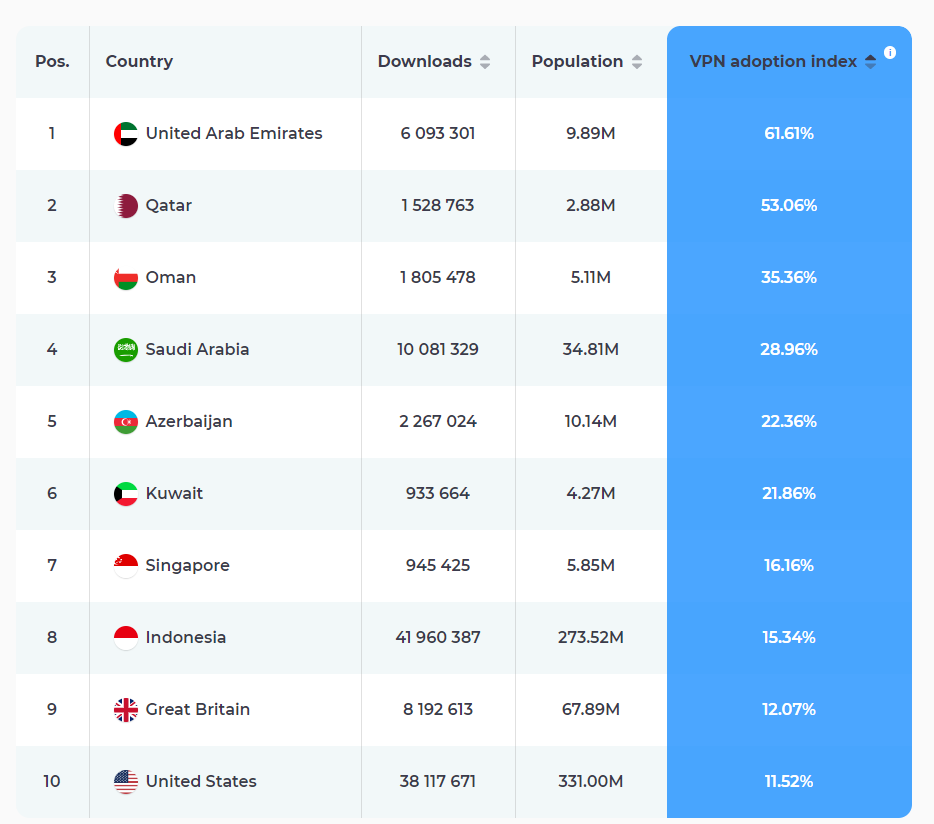 First up in terms of VPN adoption is the United Arab Emirates (UAE), with a 61.61% penetration rate in the year 2020. Over 9.89 million Virtual Private Network downloads originated from the UAE.

Of course, there are a few specific reasons for the overwhelming adoption rate in this Arab country — the government employs stringent internet restrictions.

What is more, VoIP services are also banned in the United Arab Emirates. This is one of the main reasons expatriates turn to VPNs as a solution to reach out to their families.

The differentiating factor in Oman is how tightly the government monitors its citizens. Conversations over mobile phones, e-mail, and online chat rooms are all tracked by the authorities. Officials even interrogate citizens who were caught bad-mouthing the government.

Another interesting fact is that all Oman’s internet cafes are under a strict restriction - their floor plan must be designed so that the cafe’s employees always see their customers’ computer screens. Meaning, internet cafes do not have closed areas, curtains, or any other objects that might obstruct the view.

Fourth in terms of VPN adoption is Saudi Arabia - geographically the largest sovereign state in Western Asia. VPN penetration rate in Saudi Arabia stands at 28.96% and 34.81 million downloads in 2020.

The Saudi government is relentless in its information censorship and restricts a wide range of media, including newspapers, books, television, films, and all online content. Saudi Arabia’s government authorities explain that only content that is against Muslim values is filtered, but comments from citizens reveal that even those who criticize the leaders are censored.

Reviewing the top four VPN adopters indicates that the adoption rate correlates with how strict the internet censorship and other online restrictions are in that country.

VPN penetration in Azerbaijan is in fifth place worldwide, with 2.27 million downloads and a 22.36% adoption rate. The close sixth is Kuwait, with a 21.86% penetration rate as well as 933 thousand installs.

The seventh-place goes to Singapore. Over 945 thousand downloads originated from this country, amounting to a 16.16% VPN adoption rate in the year 2020. Following it is Indonesia, with a 15.34% adoption rate and staggering 41.96 million installs.

As the world tries to adapt to the new way of life under the COVID-19 outbreak, more people are staying at home and using the internet, leading to a dramatic increase in the use of VPNs

From February 2020, people began using the internet more often, with many of them choosing to watch TV shows and movies.

But certain streaming services, such as Netflix, BBC and Amazon Prime, apply geo-restrictions to view the content. However, a VPN provides a way to bypass those blockages.

Moreover, the majority of employees started working from home, and their employers require their workers to use VPNs for security reasons.

Rachel Welch, COO of Atlas VPN, shares her insights on how the VPN market shifted in 2020:

“The year 2020 will be remembered as a year when VPNs became mainstream since millions of people shifted to remote work amidst the coronavirus pandemic. Among other things, to access a company's network, most people have to use VPN to protect their as well as their employers’ data.”