There's no denying that a VPN protocol is one of the most important things for a VPN. After all, it is responsible for creating a secure connection between your device and the VPN servers, this way hiding your online activity from prying eyes on the internet. The type of VPN protocol you use can impact your connection's speed, security, and privacy.

Up until now, Atlas VPN has employed IPSec/IKEv2 — a widely trusted and accepted VPN protocol. However, as our team always strives to go hand in hand with the most current advancements in both the technology and security fields, we're also introducing support for WireGuard® — the latest and most advanced VPN protocol on the market.

WireGuard is an open-source VPN protocol created by cybersecurity researcher Jason A. Donenfeld. Released in 2018, WireGuard is the most recent newcomer to the VPN protocol scene and the first new VPN protocol to come out after more than a decade since OpenVPN's launch in 2001.

In contrast to older and highly complex protocols, such as IPSec/IKEv2 and OpenVPN, WireGuard was built with only the most necessary features. Essentially, it aims to be a simpler, faster, more secure, and overall more modern alternative to existing legacy protocols, and it succeeds in all four aspects.

The highlights of WireGuard protocol

Just like any other VPN protocol, WireGuard is essentially a set of rules and processes that determine how a secure connection, or in other words, a virtual tunnel between your device and VPN server, should be formed. However, it's the way WireGuard does it that differentiates it from other protocols.

A lightweight code base gives WireGuard several advantages. First of all, it leaves less room for errors, vulnerabilities and provides a much smaller attack surface. It also makes the WireGuard protocol much easier to implement and audit. In fact, it has been thoroughly reviewed and verified by a large number of security researchers and specialists.

Robust encryption. Instead of using a wide range of cryptographic algorithms like almost any other major VPN protocol, WireGuard employs a combination of carefully selected few.

These include some of the most modern cryptographic algorithms available, such as ChaCha20 and Poly1305 for authentication and data exchange, BLAKE2s for universal hashing, and Curve25519 with the Elliptic Curve Diffie-Hellman (ECDHE) protocol for key exchange.

Encryption is essential to VPN protocols. It helps to convert the data, such as your online traffic, from a readable format to an unreadable gibberish to anyone who tries to monitor it, be it your Internet Service Provider, government, hackers, or snoopers.

Due to algorithms' robust security and efficiency, companies such as Google have switched to using ChaCha20 and Poly1305 for encrypting traffic on its Android devices. Our IKEv2 implementations also use ChaCha20 in some configurations.

Stable connection. Roaming is built into the WireGuard protocol. Therefore, WireGuard can easily jump between networks without needing to recreate the tunnel whenever the networks change or the connection is lost, making the protocol very stable.

So if you're out and about and your phone suddenly changes networks from Wi-Fi to 4G, you'll stay connected to a VPN. Even if you lose your internet connection altogether for a short period of time, your VPN will reconnect whenever you're back online without you needing to take any extra steps.

Faster speeds. Perhaps the most notable aspect of WireGuard compared to other VPN protocols is its speed. A lightweight code base, modern cryptography, and a better protocol design place less load on VPN servers, increasing their performance. This way, WireGuard can offer lower latency and reach higher speeds than its less efficient and older counterparts for a faster streaming, gaming, and overall browsing experience.

Well-informed readers will know that WireGuard does not come with built-in functionality for user authentication, authorization, and accounting. We, however, wanted to keep WireGuard as close to the original as possible.

Therefore we created our own method of securely authenticating users with our WireGuard services via HTTPS (TLS) requests. This allows us to keep WireGuard free from modification while achieving good connection speeds and security for our users and infrastructure.

How to enable WireGuard protocol on Atlas VPN?

With Atlas VPN, you can choose between several protocol options, including WireGuard and IPSec/IKEv2, to see which one best suits your needs.

To select your preferred protocol, follow these five simple steps: 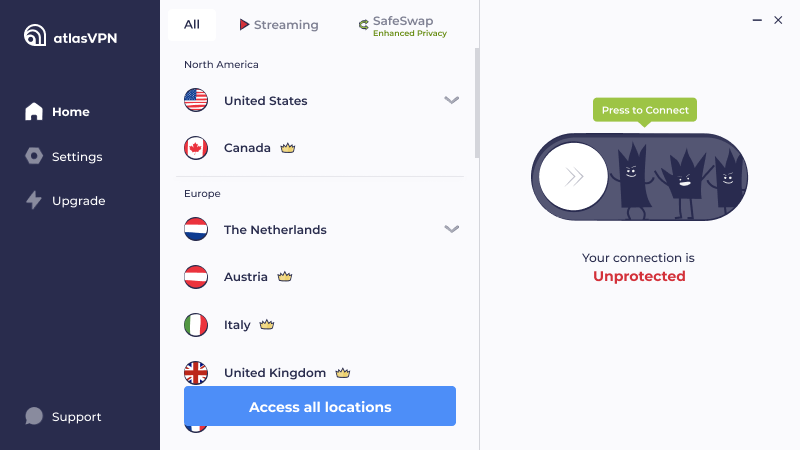 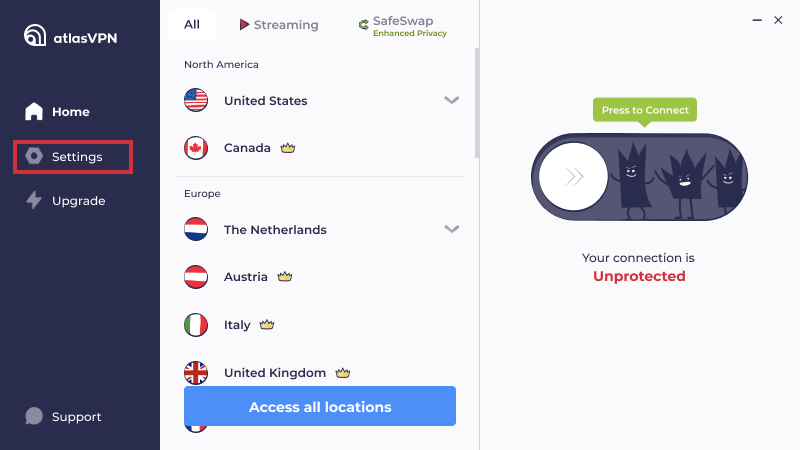 Step 3. Then, navigate to the Protocols section. 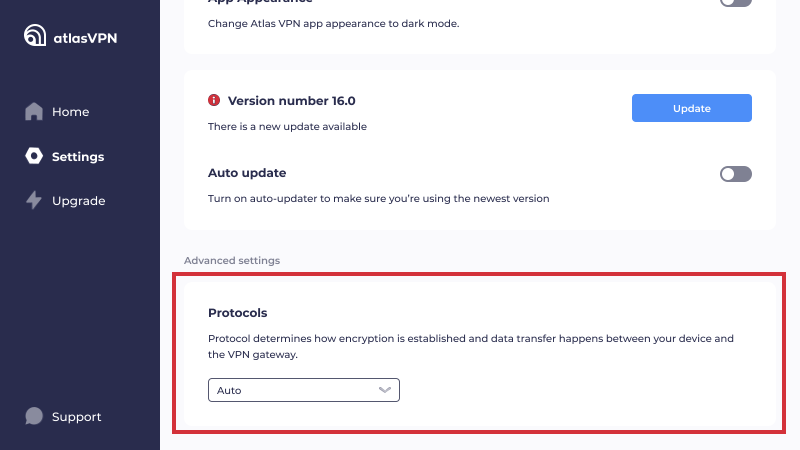 Step 4. Select WireGuard, IPSec/IKEv2, or Auto from the drop-down menu. If you select the Auto option, Atlas VPN will pick the most optimal protocol for you. 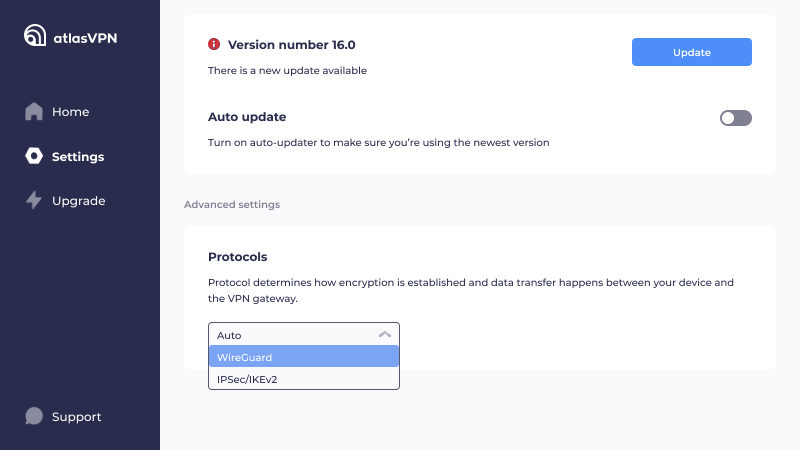 Step 5. That's it! You can switch between VPN protocols anytime by following the same steps.

“WireGuard” is a registered trademark of Jason A. Donenfeld.