Data acquired by Atlas VPN reveals that the US experienced nearly 4 times more DDoS attacks in March than China. Research shows that the US was DDoS-attacked over 175 thousand times, while China suffered 45 thousand attacks.

DDoS is short for Distributed Denial of Service, and it is an attack used to crash a service, making it temporarily inaccessible to its visitors.

To perform a DDoS attack, hackers infect multiple devices. Turn them into bots and direct them to a targeted IP address. The targeted website or service can no longer accept valid requests from actual visitors. It is being flooded with heavy traffic, coming from fraudulent requests. 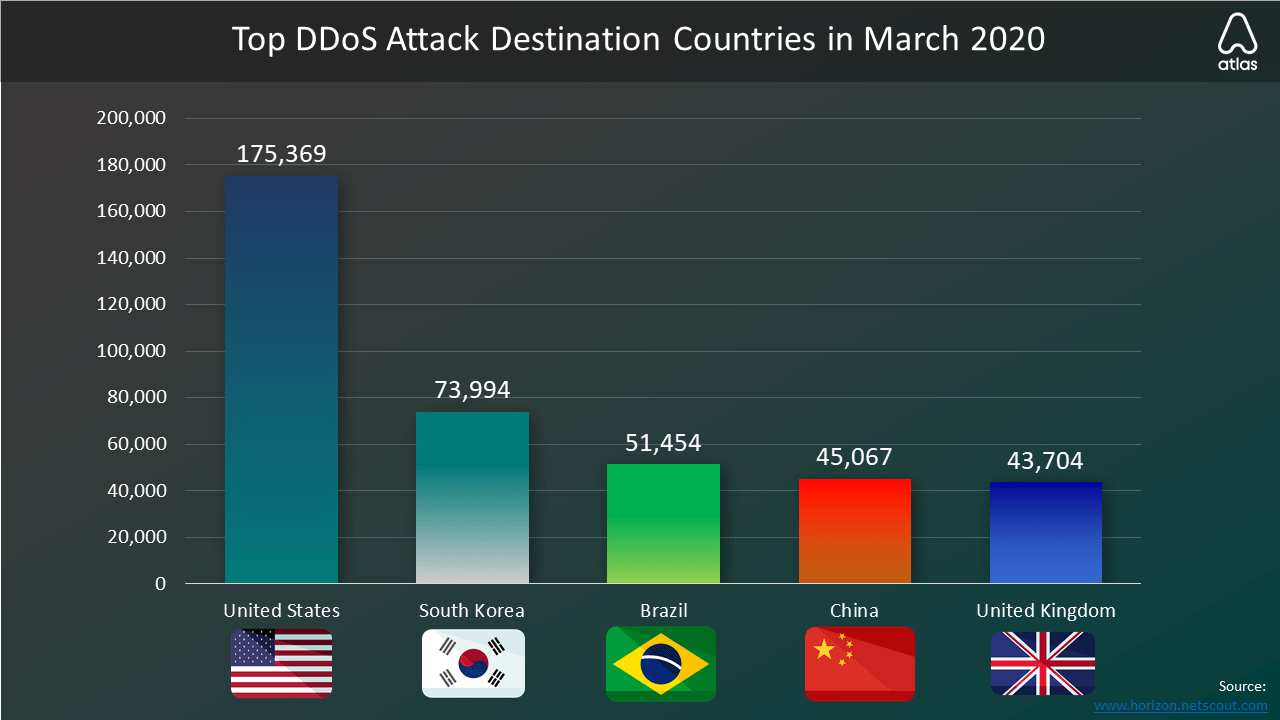 Being the top DDoS attack destination country, the US experienced 21.6% of the attacks worldwide in March, according to a real-time data provider Netscout. South Korea was the second most DDOS-attacked country in the world last month – with nearly 74 thousand cases, it suffered from 9.1% of the attacks globally.

Meanwhile, Brazil suffered from over 51 thousand DDOS attacks, being the third country in the list. Last month, Brazil experienced 6.3% of the attacks.

Similarly, there were 45 thousand DDoS attacks in China and 43 thousand registered cases in the UK. Completing the top 5 list, China experienced 5.7% of the attacks worldwide. While the UK got the last 5.4 % portion of cases worldwide.

Why the difference between China and US

Although the difference between numbers in the US and China is significant, it is not surprising. China is known for its harsh methods used to censor information on the internet and its ways of shutting down anything that does not please the Communist Party. Furthermore, many Chinese websites are inaccessible for people from other countries, and VPN services are banned there, so VPN providers do not offer servers in China.

Hence, hackers are not looking for security flaws in China and rather focusing on the US, since they have much more to target there. The internet in the US is significantly less restricted, so there are more services cybercriminals can get their hands on.

At the same time, the US had the largest number of performed DDoS attacks globally. With over 439 thousand cases, the country makes it to the top of the list. During March, 54.1% of attacks originated from the United States-based IP addresses.

Yet, it should be mentioned that cybercriminals may be using VPN tools, which allow changing your IP address and online location. 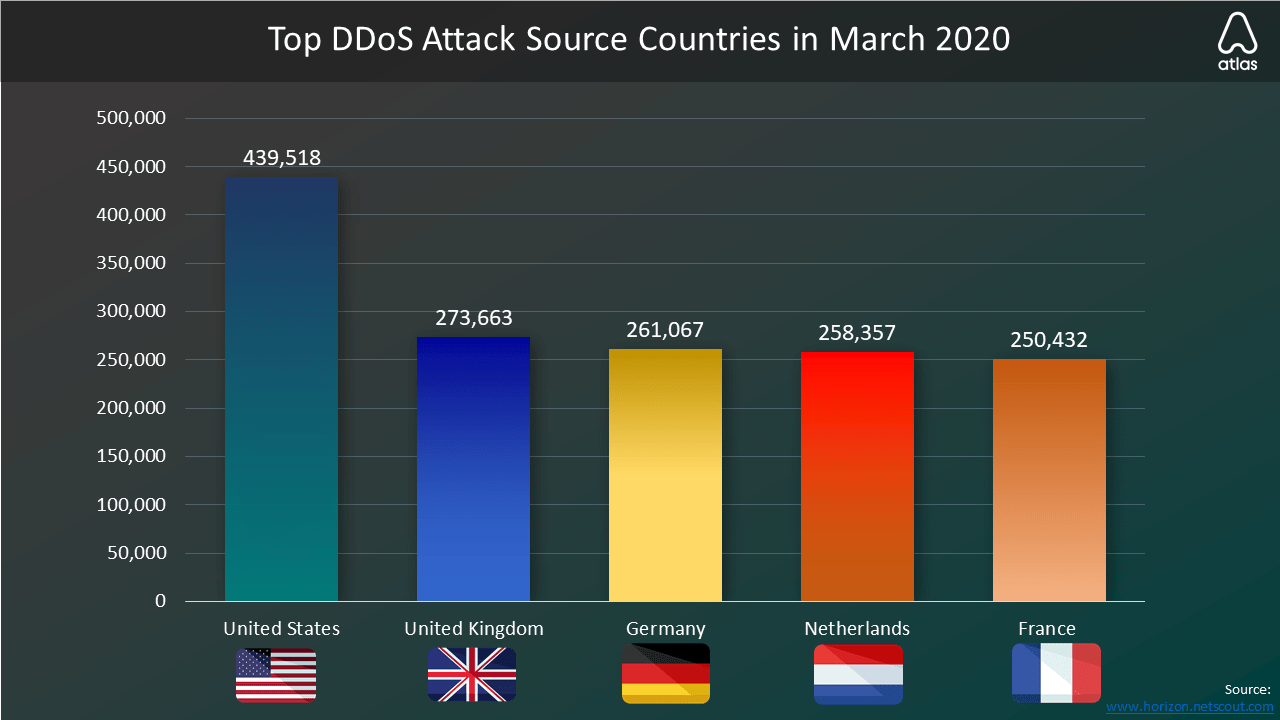 With over 273 thousand cases, the UK is the second country in the list – 33.7% of DDoS attacks were done using UK-based IP addresses. Similarly, there were over 261 thousand DDoS attacks performed via Germany-located IP addresses, which accounts for 32.1% of the total.

Both with over 250 thousand cases, the Netherlands and France make it to the bottom of the list. Last month, 31.8% of DDoS attacks originated from Dutch IP addresses, while 30.8% of cases were coming from French IPs.

Although individuals suffer from a DDoS attack, typically, cybercriminals target services instead. They often attack services that are hosted on high-profile web servers, like banks or credit card payment gateways. Revenge, blackmail, and activism are the most common reasons behind the performed attacks.

Many businesses that suffered from a DDoS attack believe it was done by their competitors. Having your service inaccessible harms the reputation and enhances the possibility of the customer turning to your competitor instead.

Ensuring a positive user experience, maintaining a good reputation, and preventing customer loss are the top 3 reasons enterprises should invest in DDoS protection, according to Security Boulevard. Furthermore, research done by Cloudflare reveals that the average cost of infrastructure failure to businesses costs $100,000 per hour.

As Radware’s research reveals, one in three organizations will experience DDoSing at one point or another. That is why enterprises invest in DDoS protection. There are different providers that offer DDoS protection, with Cloudflare being the largest one in the market. It accelerates the website speed and protects it from various online threats, DDoS attacks being one of them.