How to Prevent DNS Spoofing?

DNS spoofing is one of the most common Domain Name System (DNS) attacks out there today. DNS is like a phonebook of the internet, yet, it carries many vulnerabilities for threat actors to take advantage of. Otherwise known as DNS poisoning, such attacks can lead to data theft, malware injections, and other poisonous techniques to harm your digital presence. Even though they are not easy to perform, they are feasible. Hence, how to fight back against a DNS spoofing attack?

To understand how DNS spoofing works, we need to comprehend what a DNS server is. At its most basic, DNS converts a hostname, such as google.com, into a computer-friendly Internet Protocol (IP) address, like 198.167.166.14. You can think of it as the analogy of a phonebook or contact list, which matches websites’ names and their unique numbers.

Each internet-connected device, including websites, mobiles, or laptops have unique IP addresses, which help other computers to identify them. Whereas web browsers interact through IPs only, DNS eliminates the need for humans to memorize all individual strings of numbers. In other words, it converts human-readable domain names into IPs so that browsers can load Internet addresses. The process takes a couple of milliseconds and is entirely unnoticeable.

Right now, your Internet Service Provider (ISP) is running multiple DNS servers, which saves information from other servers as well. In essence, your Wi-Fi router at home acts as a DNS server, as it caches data from the servers of your ISP. Another related threat is DNS hijacking that can have similar risks.

What is DNS spoofing?

DNS spoofing is an attack that tricks your computer redirecting it to a dangerous domain address. One of the most popular tactics is DNS cache poisoning. It happens when a hacker gains control over a site’s DNS server and changes information on it. It is mostly done by altering the DNS records and redirecting traffic to a malicious server which belongs to an attacker. For instance, if someone changed the entry for google.com, any visitor would be redirected to a wrong IP address or, more specifically, to a fake website. 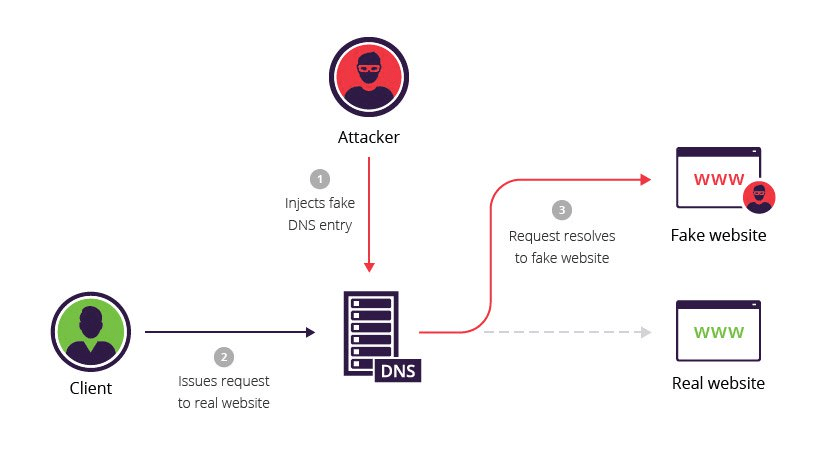 By redirecting victims to phishing websites, attackers can inject malware on routers and other end-user devices. Also, by executing DNS spoofing, they can perform a man-in-the-middle attack. As a result, they can gain access to sensitive data, including private login information, financial details, and email exchanges.

Most importantly, it is yet unknown how to detect DNS cache poisoning. Such an attack is one of the most odious and challenging to detect. You might encounter involuntary redirection to websites or online ads, but there may be no more evident symptoms.

How to prevent DNS Spoofing?

Luckily, you can fight against DNS spoofing attacks and prevent yourself from falling victim to them. Here are a few simple precautions you should take:

If DNS spoofing leads you to a phishing website, most likely, it will look identical to the original site you intended to visit. You should always look for a small padlock icon next to the URL, which implies a valid SSL certificate and verifies the site’s owner.

Have a closer look at the purpose of the website. Be skeptical towards websites that offer you to download a bizarre program or require private information. Also, malicious advertising, or simply malvertising, is a common DNS spoofing practice that’s not always easy to spot. But, in most cases, fake websites contain spelling errors or sentences written in an unprofessional manner. Hence, if you find the content to be odd, the website might be malicious.

With real-time antivirus protection, you can stop any malware payloads. Be sure to regularly scan your devices for incoming threats and phishing attacks to secure them.

A VPN not only helps to prevent man-in-the-middle attacks, but also takes your security to the next level. Atlas VPN’s feature Safebrowse protects you from entering malicious websites and services. Also, it sends all your DNS requests through an encrypted tunnel, meaning that no one can intercept or alter them.