According to data compiled and analyzed by Atlas VPN, hackers attacked businesses more than 22 million times during the last week worldwide. Over 63% of these hacking attempts were malware attacks.

Malware is a type of software that tends to either steal users’ files or encrypt them and render them useless until a password is entered that will decrypt the data. Hackers demand a ransom in order for you to retrieve the password, hence the commonly used name ransomware.

Phishing is the fraudulent attempt to obtain sensitive information such as usernames, passwords, and credit card details by pretending to be a trusted figure, such as a bank employee or even your colleague.

A Command & Control (C&C) attack is when hackers attempt to take over control of a system and then steal or delete data. C&C attacks can also be used as a part of a phishing scam or a way to infect the network with malware.

Atlas VPN  has extracted and organized the data acquired from a cybersecurity giant Akamai, that provides real-time data on cyberattacks that their corporate customers are under. They catch a significant amount of attacks globally since they are one of the largest distributed computing platforms in the world. They are responsible for serving between 15%-30% of web traffic globally. 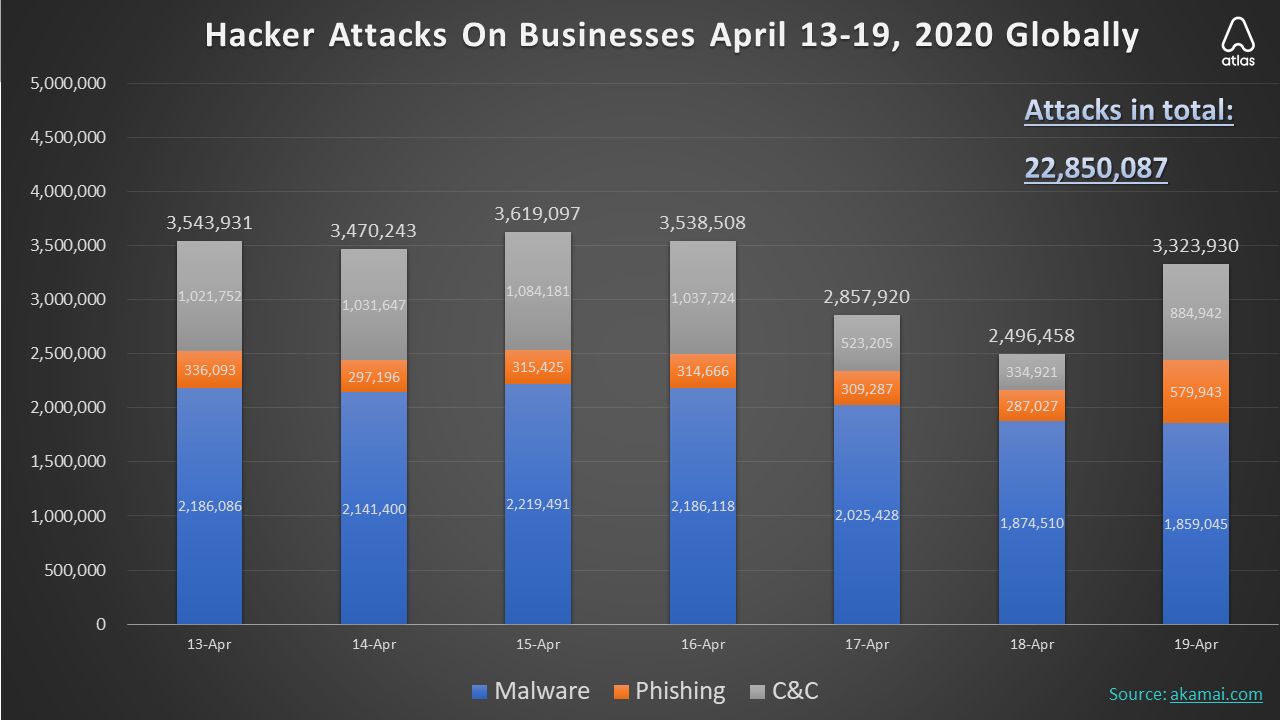 On average, there were 3.26 million cyberattacks daily throughout last week. From the chart, we can see that hackers carried most cyberattacks on April 15, with a total of over 3.6 million intrusion attempts. Interestingly, most of these cyberattacks were malware attacks.

The reason being, it is usually the easiest way to infiltrate companies' networks and to steal or freeze data and to demand a ransom. On average, there were 2,070,297 malware attacks per day during last week. Malware attacks comprised 63% of the total attacks.

In comparison, phishing attacks and C&C attacks comprised 11% and 26% of total attacks, respectively.

It seems that even some hackers took the last Saturday (April 18) off, since there were -12% fewer attacks than the average day.

Compared to the previous week, (April 6-12) where the total volume of attacks was 23,807,517, this week hackers attacked enterprises around 1 million times less. 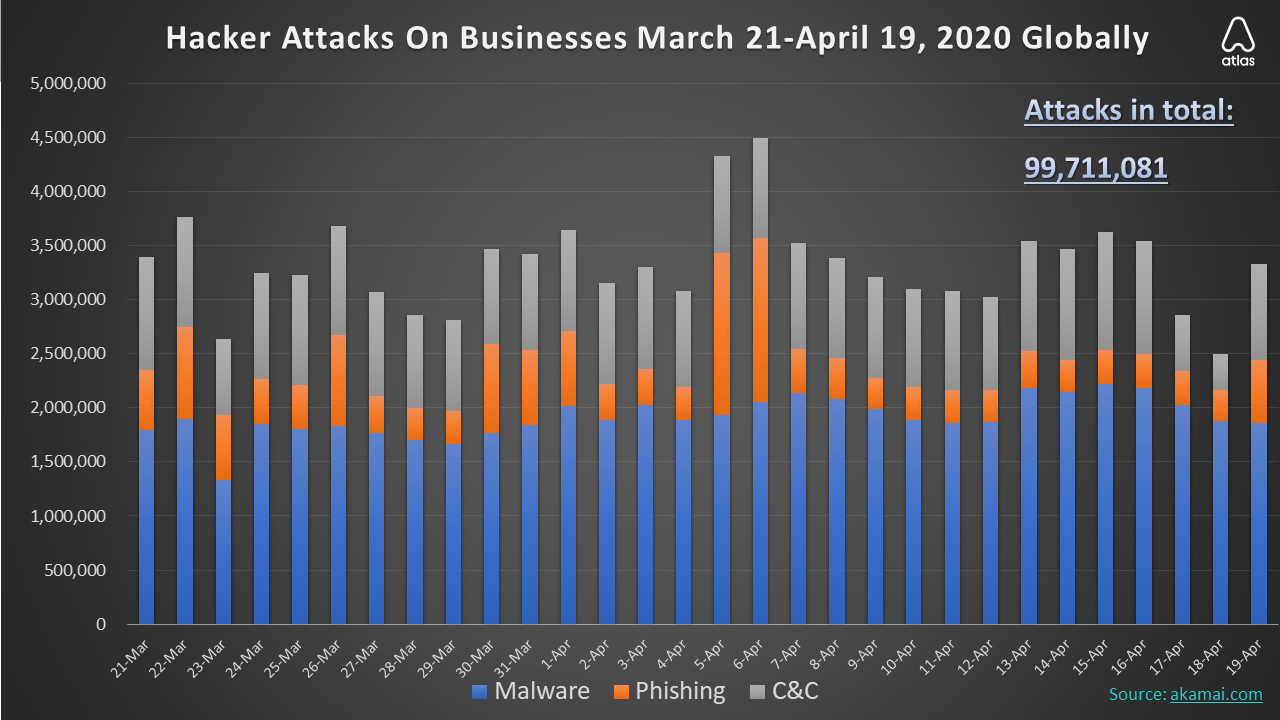 Moreover, C&C attacks were the second most common type used by hackers with over 27 million attacks in the last 30 days. In other words, C&C amounts to over 27% of all attacks on enterprises.

Finally, phishing scams are the least common type of attacks used by hackers, with a total of over 15 million attacks in the same time-frame. This accounts for over 15% of the total volume of attacks.

It seems that hackers do not have a preference for the day of the week or the time of the month for cyberattacks. The smallest number of total attacks happened on March 23 (Monday) and April 18 (Saturday).

In contrast, the most active days were April 5 (Sunday) and April 6 (Monday).  In these two days alone, cybercriminals tried to infiltrate corporate networks 8,821,850 times.

As mentioned in the methodology, Akamai services around 15-30% of web traffic worldwide. Meaning, at most, they are able to detect less than one-third of the total attacks.

Taking this into account, a conservative estimate of the total volume of hacker attacks on business per month could reach a staggering 300,000,000, yes 300 million.

If we would lean towards the fact that Akamai only catches 15% of cyber-attacks globally, then the number of actual attacks happening per month could reach as much as 600 million.

By these estimations, hackers could be attacking corporations 20 million times per day globally.

This is a rough estimate; however, the numbers do not seem so extreme considering the fact that at least 7.9 billion records, including credit card numbers and other highly sensitive information, have been exposed through hacker attacks in 2019.

In 2020, due to the increased internet usage and more people working from home due to the coronavirus pandemic, this could be a record year for both hacker attacks and the number of records breached.