According to the latest Atlas VPN research, cybercrime totals $1.5 trillion in revenue annually. In comparison to Walmart, the biggest US company in terms of earnings, cybercrime enjoys 3 times greater gains. Walmart’s income reached $514 billion in 2019.

Cybercrime is bigger than ever and towers over the most popular companies. Even by taking Tesla, Facebook, Microsoft, Apple, Amazon, and Walmart, their combined annual revenue only amounts to $1.28 trillion.

In this study, cybercrime revenues include crimes where computers play an important and direct role. Some categories that were on the fence were not included. For example, earnings from phone scams are not included in these estimations. 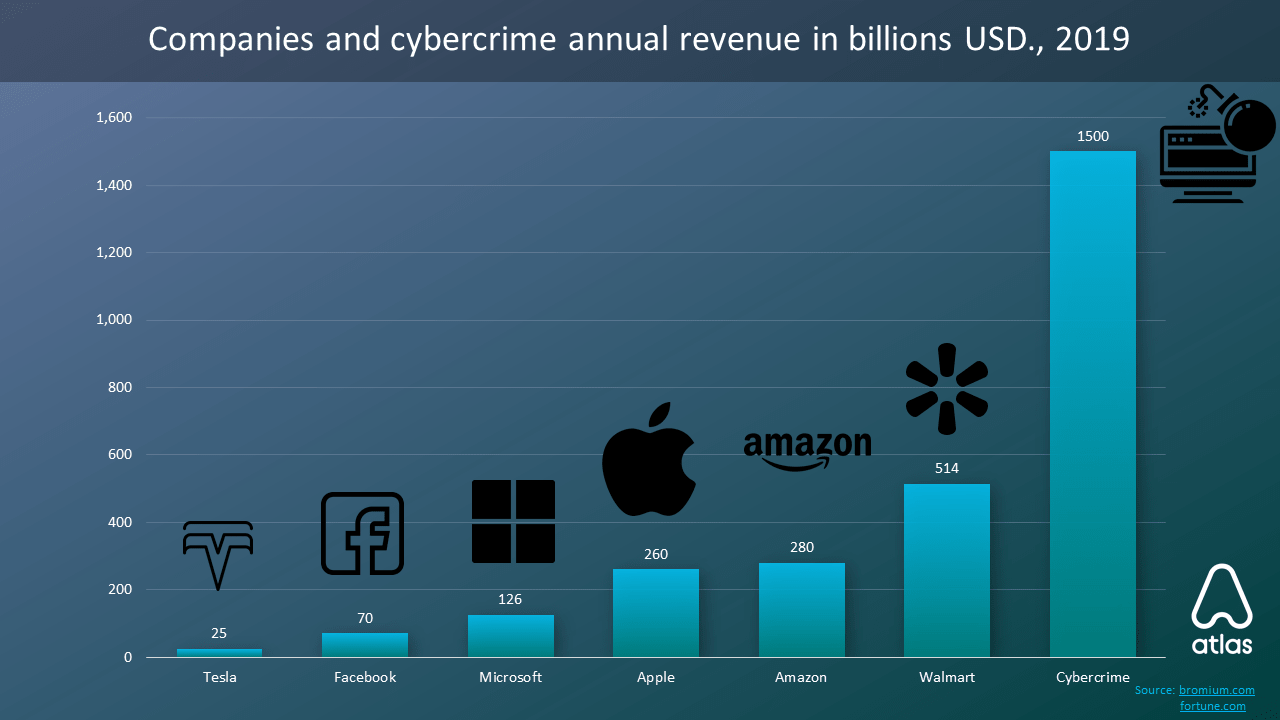 Cybercrime revenue exceeds Walmart’s by close to $1 trillion. Yet, they are similar in the fact that both sell an extensive selection of products and services.

Trade secret or intellectual property theft earns more than half a trillion USD in revenue per year. Cybercriminals steal and then sell innovative technologies or secret strategic plans that give companies a competitive advantage. Hackers steal military technologies, renewable energy innovations, and much more.

Researchers delved into the depths of the dark web to estimate how much different cybercrime forms earn: 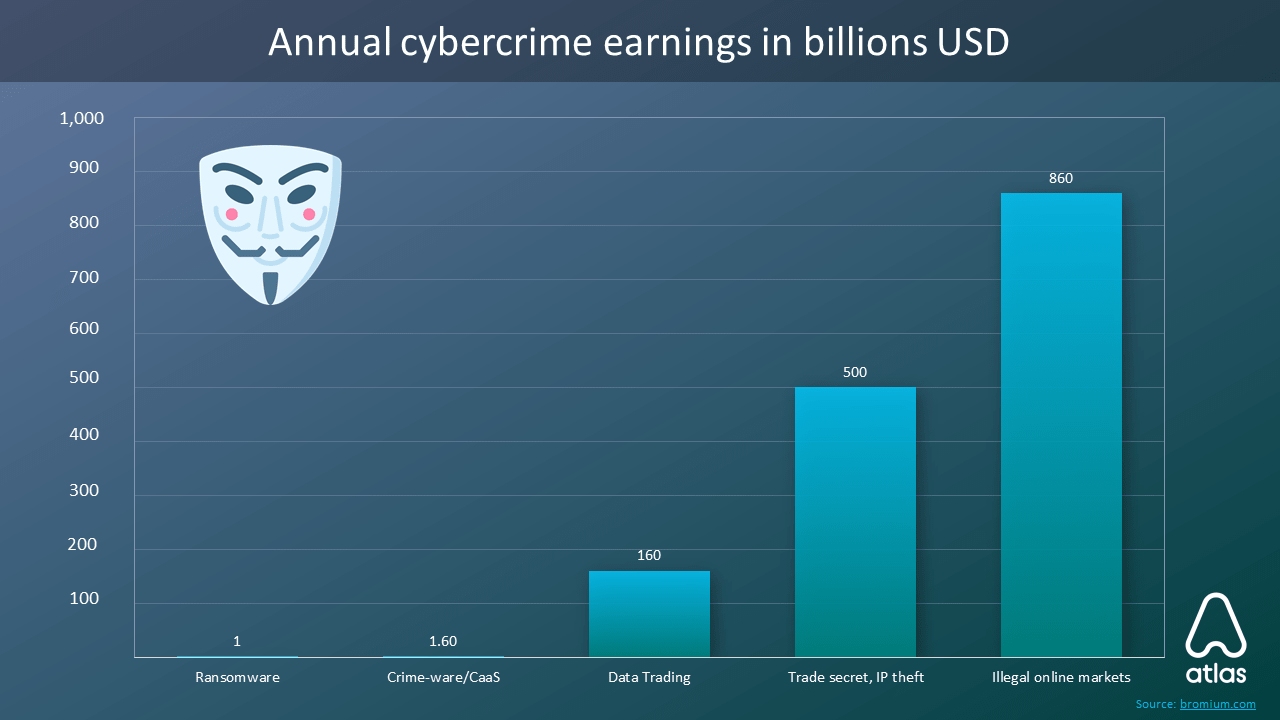 Ransomware brings hackers at least $1 billion annually. Hackers use ransomware to lock the victim out of his device or files. Then, the criminal demands an anonymous online payment to restore access.

Moving forward, crime-ware or cybercrime-as-a-service (CaaS) earns hackers $1.6 billion per year. These services offer a variety of attacks. You can order banking Trojans, DDoS attacks, and even phishing email campaigns.

Data trading is in third place in terms of earnings, with a staggering $160 billion per year. Data trading generates 10 times more revenue than crime-ware or 16 times more than ransomware. There is a wide range of data for sale on the dark web. You can purchase anything from stolen credit card details to a person’s birth date or address.

Having a well-calibrated team and selling a wide array of services, cybercriminal groups earn about 10-15% more than traditional criminals. Highest ranking hackers and group leaders make more than $2 million per year.

However, there’s a massive gap between how much different hacker groups earn. It depends on the hacking type, the risk taken, and how many people are within the organization. Individual hacker earnings range from $45,000 to $2.5 million per year. These figures are based on the data of prosecuted criminals.

Some still believe that a typical hacker is a guy wearing a hoodie in a dark room. Nowadays, cyber-criminal groups have everything from hiring staff to executives. Some groups even have public personas who make sure the hacker group has a good reputation. Hackers sell most of their stolen goods on the dark web, where reputation is key.

These are the essential people needed in the organized cybercrime group:

Team Leader - A person who coordinates between other team members and tracks their progress. Also, it might be one of the criminal group leaders proxies. He informs the team about the newest tasks and keeps ahead of law enforcement.

Coders - They customize the existing malware or create a completely new one, depending on the organization’s needs.

Call Center worker - Least paid workers, but an essential part of the organization. Usually, they call people pretending to be computer support staff. Their goal is to install malware on the victim’s computer.

Data miner - A person who systemizes the data. Most of the time, stolen data contains a lot of unnecessary information. A data miner filters the information and provides it in a form that can be sold and used.

Money specialist - Sales staff of the criminal group. Their job is to turn the stolen data into money or other assets.

All things considered, with entry costs relatively low and profits exceeding those of traditional crimes, cybercrime is an attractive choice for criminals. There’s also less risk when carrying out cyber-attacks than, let’s say, burglary or armed robbery.

To protect yourself from burglars, you set up an alarm system and lock your doors. What about protection from cyber-attacks? Just like securing your home, you have to protect your phone. Using a VPN is one of the basics of cybersecurity. Atlas VPN encrypts all your internet data so that it could not be compromised. Get Atlas VPN for your mobile devices.